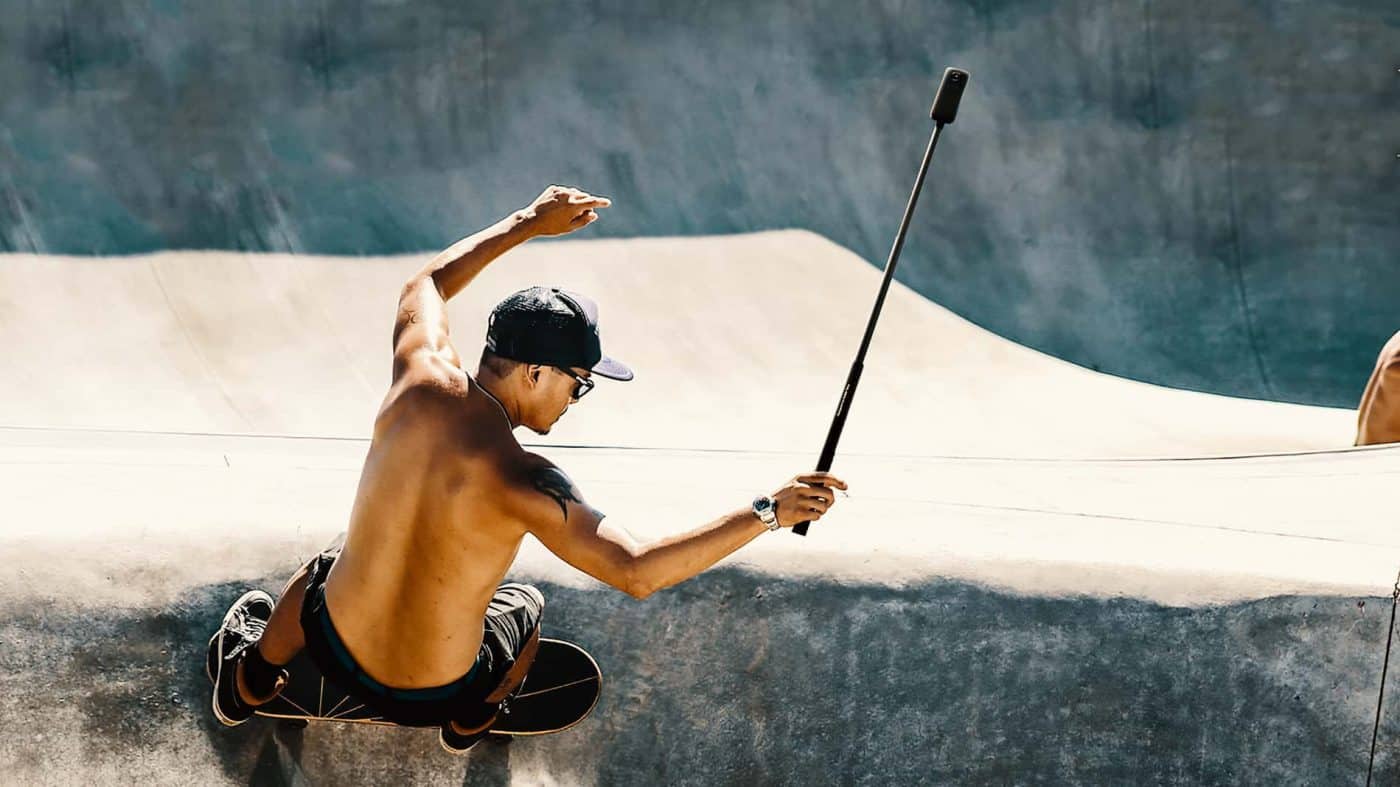 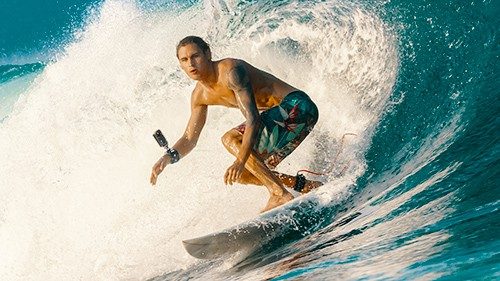 Brand
Insta360
What is It?
360-Degree Action Camera
Where to Buy?
On Amazon

Insta360 is back at it again after releasing the predecessor to their highly-rated action-cam, Insta360 ONE, the Insta360 ONE X. Its significant improvements make it a strong contender among the action cameras that are available today, and could even rival the GoPro Fusion and the GoPro Hero8 .

Content creators, vloggers, extreme sports athletes or even just the casual moving footage takers who like to document their adventures know that having to import and edit their videos on their desktop setup can be a pain sometimes. Well, the folks over at Insta360 have found a solution to this by getting into the mindset of action-cam enthusiasts.

They figured out how content creators could benefit from a much simpler system of recording footage, tweaking it on their simple app where you could choose from a variety of special effects and edits, and then instantly publishing it online onto your chosen video hosting platform like Youtube or Vimeo.

They also didn’t skimp out on the quality of the camera. You can now record up to a resolution of a whopping 5.7k @ 30fps. The test footage that we got from this thing is absolutely breathtaking.

In addition to that, you can say goodbye to annoying shaky footage with its proprietary FlowState 6-axis gyroscopic stabilization. It would be almost as if you’re shooting with a professional crew with a gimbal and a cage rig.

It doesn’t end there. The developers came up with another snazzy new feature called the TimeShift, which allows you to slow down or speed up your footage to suit whatever tone you’re going for. Now you can do editing like a pro does with just a few simple taps in the app.

We had a ton of fun playing with the Insta360 ONE X for a couple of days, and these are the things we love about it. 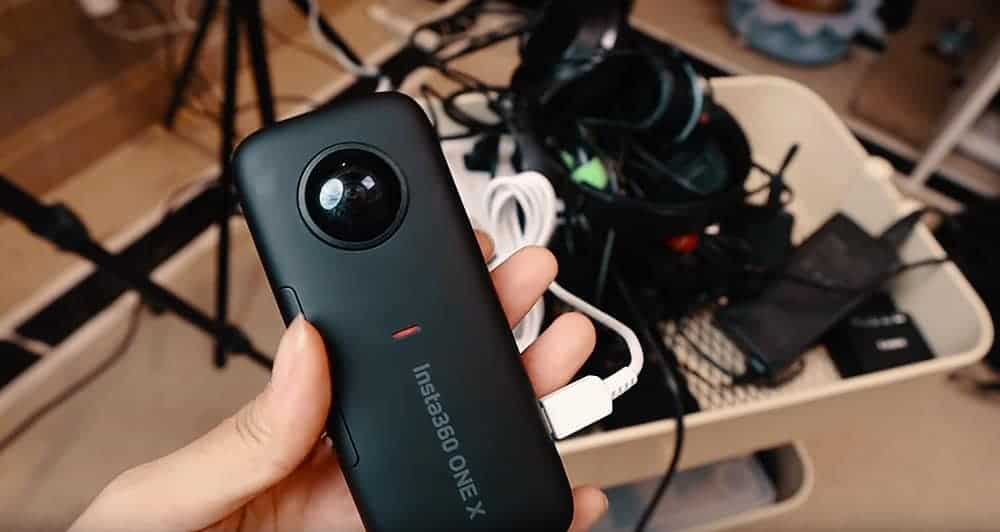 At 115g (0.25lbs), the Insta360 ONE X is a little bigger than its older cousin with its added LCD screen that allows you to change settings without having to use the app. However, this doesn’t make much of a difference when it comes to how easy it is to maneuver.

The tasteful yet inconspicuous body of the device is made mostly out of sturdy plastic which means it’s very lightweight and convenient to carry around. Two buttons are located below the screen which lets you access the menu. It’s effortless to hold and isn’t slippery.

You don’t want to drop this device. Insta360 offers a clear waterproof case that could protect it from accidents. This also allows you to take it on a dive for up to 30 meters deep.

The latched battery compartment is located on the right side. Yes, another significant improvement is that this model has a removable battery. Built-in batteries tend to run out quicker. This way, extra batteries become handy for uninterrupted use.

They also created its own custom “Invisible Selfie Stick” feature which you can easily edit out afterward with the app. Recorded videos look magical and surreal with this aspect turned on as it’s really like having a flying drone following you around.

Operating this camera is incredibly easy. The screen is bright and easy to read even outdoors, and the two buttons used to select your preferences are very intuitive. The bigger one triggers shutter or record.

One nuisance we found from our daily usage is that the camera will turn on accidentally a few times with just a light press on the power button while packed in the backpack. To minimize this problem, the makers could update the system’s firmware to only power up with a 2 second hold on the button.

The Insta360 ONE X is also Bluetooth and WiFi-enabled. This means having to do away with pesky wires. But you can still manually transfer files by connecting it via a USB port or removing the SD card, but you could just as easily link the device up with your phone where you can access your footage and edit them using the app.

As mentioned in the introduction, the stabilization algorithm on this thing is just astounding. Think creamy smooth. The resulting footage really does look like it was professionally shot. They’re using what they call FlowState technology, which yields better results than a premium camera mounted on a gimbal.

You could check the sample videos on Insta360’s website to see that they reach VR level type visual immersion. Testing the device out for ourselves just made our imaginations run wild.

You could play around with some aerial or underwater shots. Having this kind of freedom will definitely boost your creativity to the next level.

Most apps that come with devices are usually pretty rudimentary, bordering on useless. It’s usually just a marketing ploy, just to be able to say “they have an app.” However, this isn’t the case with Insta360 ONE X’s app. You can tell that they carefully built and selected the features they included with customers’ feedback in mind.

The setup is easy. You can find and download the app for iOS and Android on their respective app store and once you’ve linked the device to your phone, you can say goodbye to hours of editing on Adobe Premiere Pro CC or Corel VideoStudio.

Aside from the basics like cutting, reframing and customizing your transitions, you can use special effects will make your videos look like you have a whole production team behind you.

There is the Drift Shot which features the epic cinematic slo-mo. You’ve got the TimeShift where you can control time and perspective for added drama. There is also Light Painting which lets you draw and manipulate light from any source. The FreeCapture tool allows you to set pivot points and make the transition from one point to another seamlessly.

That’s just to name only a few.

You can also check out other creators’ work on the Explore panel to find inspiration.

Since “360” is in the name, we have to mention this device’s fantastic capability to track a set point of interest while recording automatically.  The camera can detect its movement or position whether you’re the subject or capturing something else.

Have you seen the Matrix’s iconic “Bullet-Time” moment? Now you can mimic that shot with the Bullet Time accessory add-on. If this doesn’t impress your friends, we don’t know what else could.

There aren’t many options that could boast a 5.7K (5760px*2880px) video recording resolution at 30 frames per second. Naturally, this trumps the max resolution of GoPro’s Fusion. It also supports 4K at 50fps and 3K at 100fps for increased versatility.

While the Insta360 ONE does have 23MP and ONE X only has 18MP, it still miraculously produces better photos than the former. You would think that higher MPs equal better-looking still shots, but we’ve found that photos taken on the ONE X are much sharper.

While controversial, this is not a downgrade in our eyes. Besides, 360 images are typically viewed on smaller screens anyway, where resolutions higher than 1080p don’t show much of a difference. It seems like they prioritized the video capture on this one, which makes sense because this is an action cam after all.

The exposures on this device are top-notch too, especially with HDR enabled giving footages’ lighting stay true-to-life. It can perform just as well even in low light conditions. Shooting in Log mode and applying one of the preset LUTs will give you a consistent color profile for all your video projects.

Since 360 technology is technically just taking multiple photos and arranging them to make the effect, they’ve mastered this with the One X. You can count on not having your photos come out wonky with weird misshapen images. 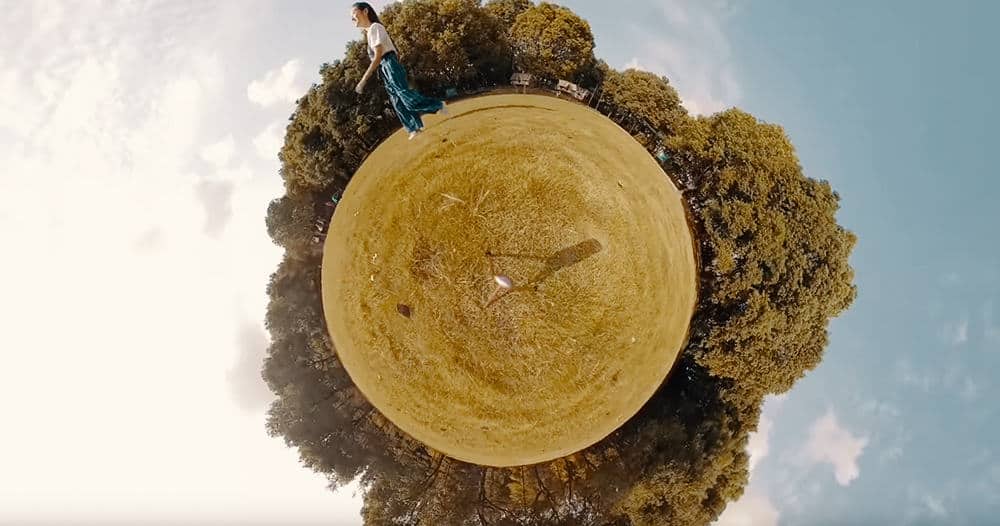 360-degree video content is trending rapidly and is the future of entertainment. With the best-in-class image quality and the myriad of unique features, the Insta360 One X might be the GoPro killer you are looking to bring along for your next adventure.

4.6
Game Changer
Where to Buy?
On AmazonOn Amazon (All-in-One Bundle)

This checklist saves you valuable time by preparing for any vacation, taking care of vacation finances, securing your home while traveling, dealing with work and family matters, and getting ready to embrace your trip. Subscribe and get instant access now!