9 Reasons Why Madeira is a Spectacular Atlantic Island Escape 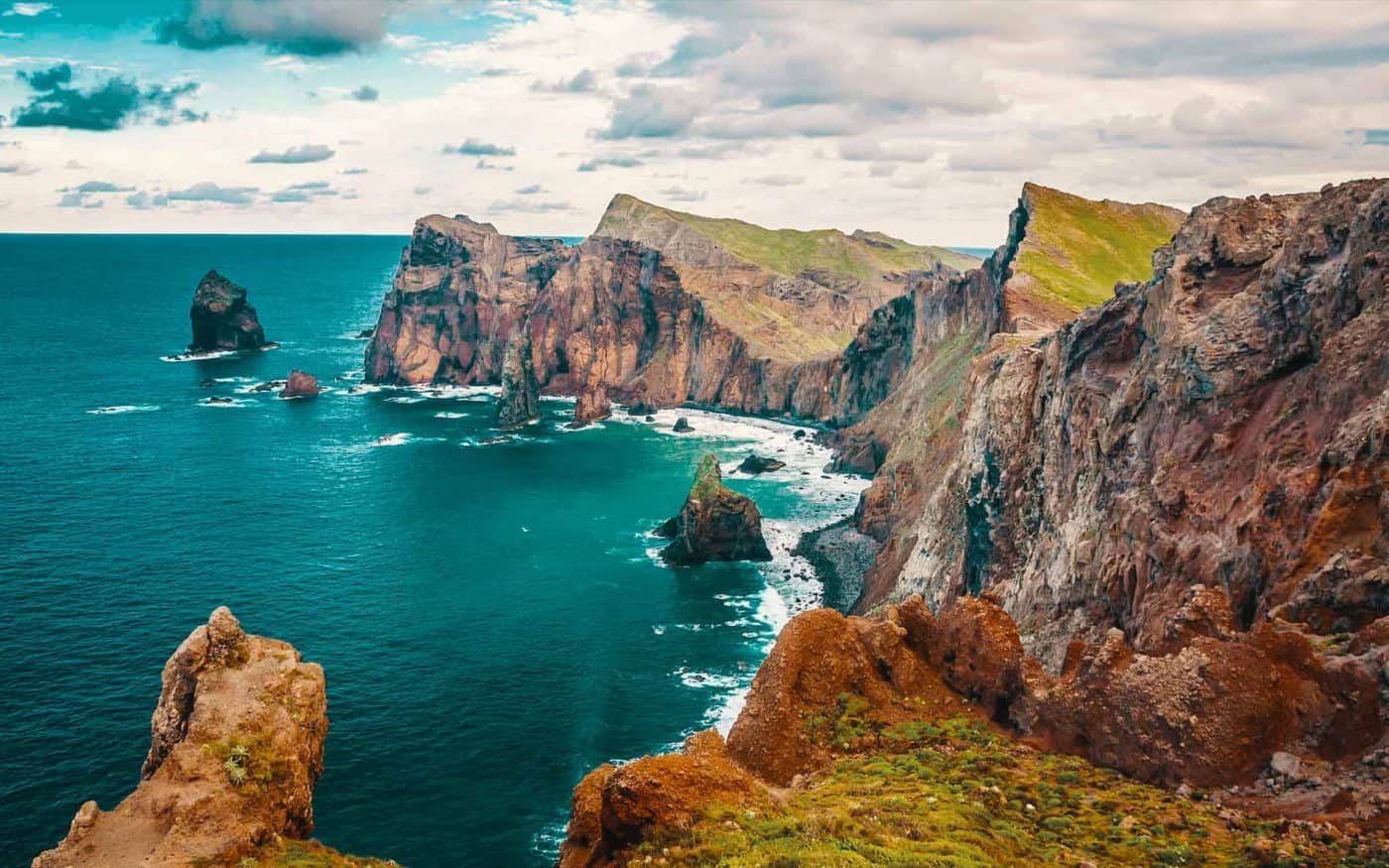 Most of us are no strangers to the stunning beauty of magnificent beaches or the snowy charm of glamorous mountain ranges.

But, what if I told you, you could be at a place where the beauty seems to be almost verging on the ethereal?

Want to see how a place having 365 days of spring and mountains birthed from the bluest of oceans with the most dramatic cliff-line looks like?

Then stop imagining already, and pack your bags for visiting the enchanting island of Madeira in Portugal, appropriately named as the “Pearl of Atlantic”!

Me and my husband visited Madeira island for the first time this year, and we were pleasantly surprised by not just the sublime landscape but also the energetic culture, delectable gourmet food and staggering hiking possibilities.

In this guide I’m bringing you 9 reasons why Madeira should be on your traveling bucket-list .

You have to see it to believe it because no picture can ever do justice to the beauty of this place.

Located just as far as you can get from the Madeira island capital of Funchal, the beautiful lava rocks have created natural saltwater pools in Porto Moniz. These bathing pools open up a spectacular view of the northwest coastline.

Since it is pretty much the Atlantic Ocean that harbors the borders of these lava rock bathing pools, the temperature can be pretty raw and piercing. For around 1.50 Euros, you can also use the changing rooms, lockers, and showers.

A vast network of highways and tunnels that has been cut through the island will let you reach the place in less than an hour’s time!

If you really think Madeira is depriving you of beaches to visit and sunbathe at, you’re in for one of the most beautiful surprises ever.

The island of Porto Santo is located in the northeast of the Madeira Island, on the North Atlantic Ocean. We had taken the daily ferry (the journey will take a couple of hours). You can also choose to take a 15 minutes flight to the location.

Porto Santo opens up a six-mile stretch of dazzling golden sand, swirled around a sparkling bay under the sun.

Even out of general tourist-season, nothing much stirs up the picturesque landscape of bare conical hills or the languid harbor town. We also got to visit the once residence of Christopher Columbus who had married the Governor’s daughter!

Hiking up the Levadas

For those of you who don’t know what they are, Levadas are irrigation channels or aqueducts that are exclusive to the Island of Madeira.

You can find a network of hiking trails following more than 2000 km (1250 miles) of these narrow stone irrigation channels that interweave across Madeira’s rugged countryside.

Many of these channels will take you into the Laurisilva forest that was part of the sub-tropical island vegetation before the arrival of the Portuguese explorers in 1419.

These levadas cover many protected areas such as the Madeira Natural Park and the Funchal Ecological Park. You can also walk along the Levada do Caldeirao to reach a 300 ft waterfall.

But for us, (not to mention my husband’s vertigo kicked in), the show-stopper was the Cabo Girao Skywalk, which is a glass-floor viewing platform over a 580m drop- Europe’s highest skywalk and second only to the Grand Canyon, worldwide.

It is certainly not for the faint-hearted though, but the mind-boggling visuals of the Madeira’s coastline, Funchal and the charming town of Camara de Lobos is something worth to endure.

Without a doubt, the best to way to go sightseeing in Madeira is to take the cable car up to the Botanical Palace or Monte Palace. And to come downhill in the most fun way-on the famous Toboggan!

The Toboggan is a wicker sled that is controlled by two drivers or ‘Carrieros’, wearing rubber-soled boots that serve as human brakes! If this description wasn’t incredible enough to get your eyes popping, know that the toboggan will come rushing down a steep, curvy path, winding right into the capital.

So, in all honesty, prepare for an adrenaline-pumping experience of the Toboggan ride that had been a form of transportation in Monte since 1850!

Madeira with its fertile soil and warm climate is known to produce some of the world’s best fortified wines, which they boost up with grape spirit. This increases its alcohol content, which in Madeira can be up to 19%!

Some of the best ones are obtained from single grape varieties, that range from dryer Sercials and Verdelhos to the richer and more famous Buals and Malmseys.

We even enjoyed a free wine-tasting session at the local producer’s, Henriques and Henriques in the beautiful fishing village of Camara de Lobos.

However, your Madeira wine experience would remain pitifully incomplete if you didn’t taste the traditional Poncha. It is prepared from honey, sugar, lemon juice and rind and Aguardente de Cana, a distilled alcohol made from sugarcane juice.

Although this concoction tastes quite sweet, I would advise you to sip carefully as it can get you greatly sloshed in no time!

When in Funchal, consider taking a hike or a tourist bus up to the mountaintop of Pico do Arieiro. It presents some of the most glorious views of the island’s natural scenery.

We literally walked in amongst the gossamer clouds which are pierced by the high and sharp peaks of these mountains and enjoyed the day on a sunny plateau!

You can either continue your hike up from Pico Arieiro to Madeira’s highest peak, all the way to Pico Ruivo. Or you can simply choose to spend the time enjoying drinks at the mountain-top restaurant.

The Many Tastes of Madeira

Madeira is popular for producing a rich variety of exotic tropical vegetables, spices, and fruits like the English tomato or tamarillo. There’s also special species of small, yet, extremely delicious banana and custard-apple. Not to forget our experience with the philodendron, which looks like a pineapple and tastes like a banana.

At the Worker’s Market, Mercado dos Lavradores, you will find a large seafood selection. And exceptional local cuisines such as the Espedata, a charcoal-roasted beef on bay-leaf skewer or the black scabbard fish served with baked banana.

Sanctum of the Nuns

The village of Curral das Freiras (Nun’s Valley) stands surrounded by a natural amphitheater of sharp mountains. It had once been a hideaway for the nuns or “frieras” who took refuge in this place to escape from the plundering pirates.

Other than this, it is famous for its chestnuts that are gathered from the woody lower slopes of this area.

In season, these are widely eaten on the streets or at dinner tables prepared as chestnut soups or with roasted goat or even as chestnut puddings with chestnut liquor to go with.

The best thing about being in Madeira during New Year’s Eve is the absolutely stunning display of fireworks that lights up the entire bay, and also the whole city of Funchal!

This spectacular show of pyrotechnics, which has its roots in the 17th century, is a traditional celebration for welcoming the new year in Portugal.

And, one of our best decisions ever was to be a part of it this year!

The shape of the bay serves as a natural amphitheater for you to enjoy the view as the fireworks are set off from more than 50 different spots.

It has also held the Guinness World Record of being the largest firework in the world back in 2006, and remains to be as astonishing as ever!

Being a fashion designer, my Madeira experience was an inspiration that I put on my next fashion project, because nothing makes me happier than to see my designs reflect my wanderlust!

Very few places can be as eternally beautiful in its climate, views, places, and traditions as Madeira stands to be.

For soccer fans, you should already know that this place is Cristiano Ronaldo’s hometown, so while you are there, be sure to catch a glimpse of his 11-foot tall bronze statue located beside Funchal Harbor and another smaller one at the Madeira airport.

And, I hope you have had enough reasons by now to fly away to this dreamy island that continues to mesmerize all its visitors, all year round!