15 Famous Drone Locations from Above for Amazing Photos 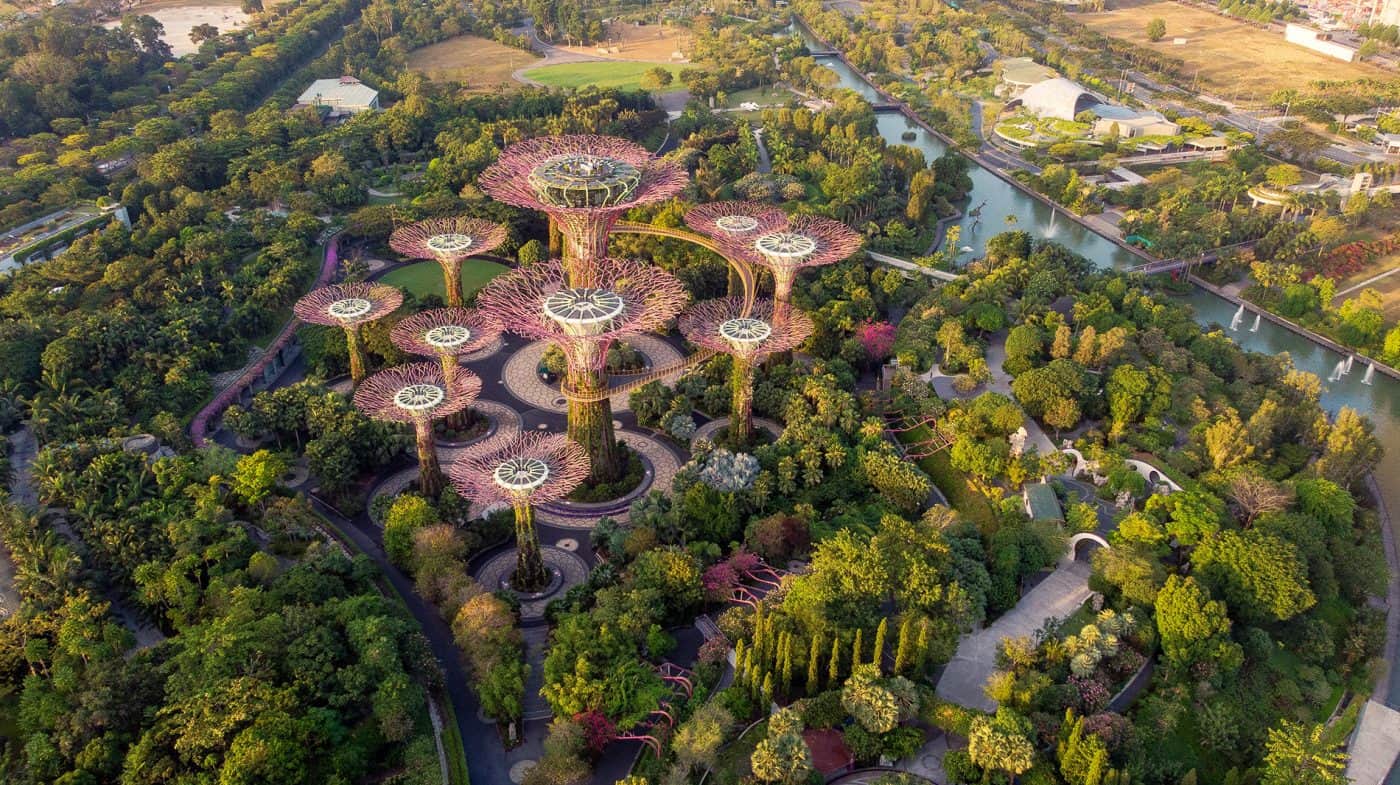 I grew up in an era where DSLR cameras reigned supreme. Back then, they were the real deal, and people never thought that the photography industry could move any further. Little did they know that drones would become every photographer’s eye in the sky and provide the world with some of the most beautiful pictures that have ever been shot.

Here’s the thing; drone photography and videography isn’t a one-size-fits-all kind of art. To get the best snaps using your newly bought drone, you must find good locations that would look good from above, such as those that I rounded up in this article. 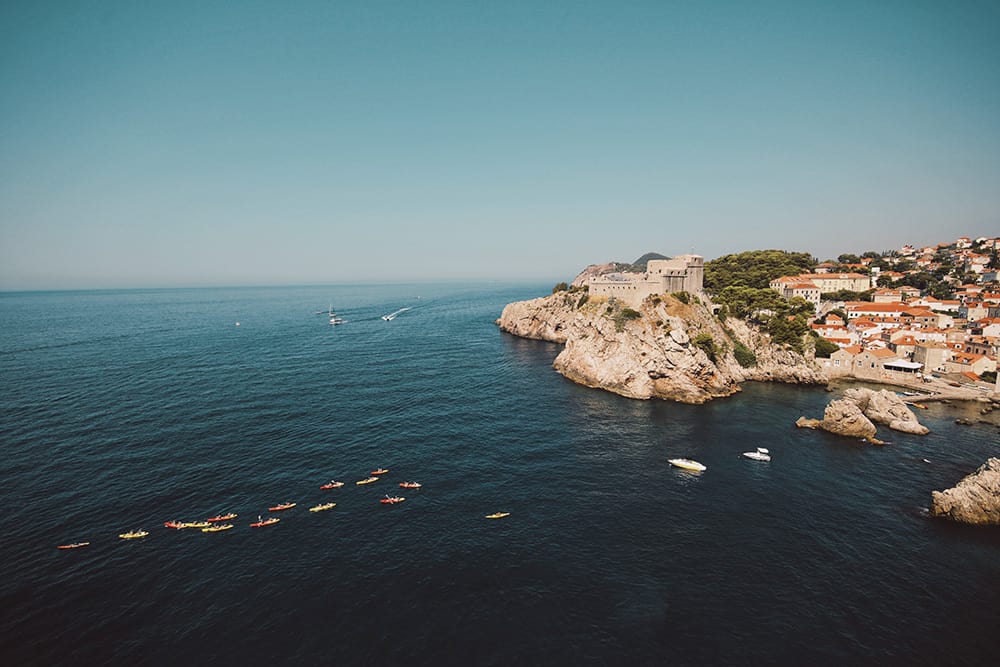 Dubrovnik is the photographer’s dream. Believe me; you’ll start imagining the astonishing snaps and video footages you’re going to take the moment you set your foot in the city. It’s a dream come true for photographers, and the dream becomes even bigger when you add a drone to the mix. The aerial view of the beach and the red roofs of the city’s buildings is Incredible. The Adriatic Sea would be more than enough on its own, but Dubrovnik has a lot more to offer, making the place a must-go destination for every drone photographer. 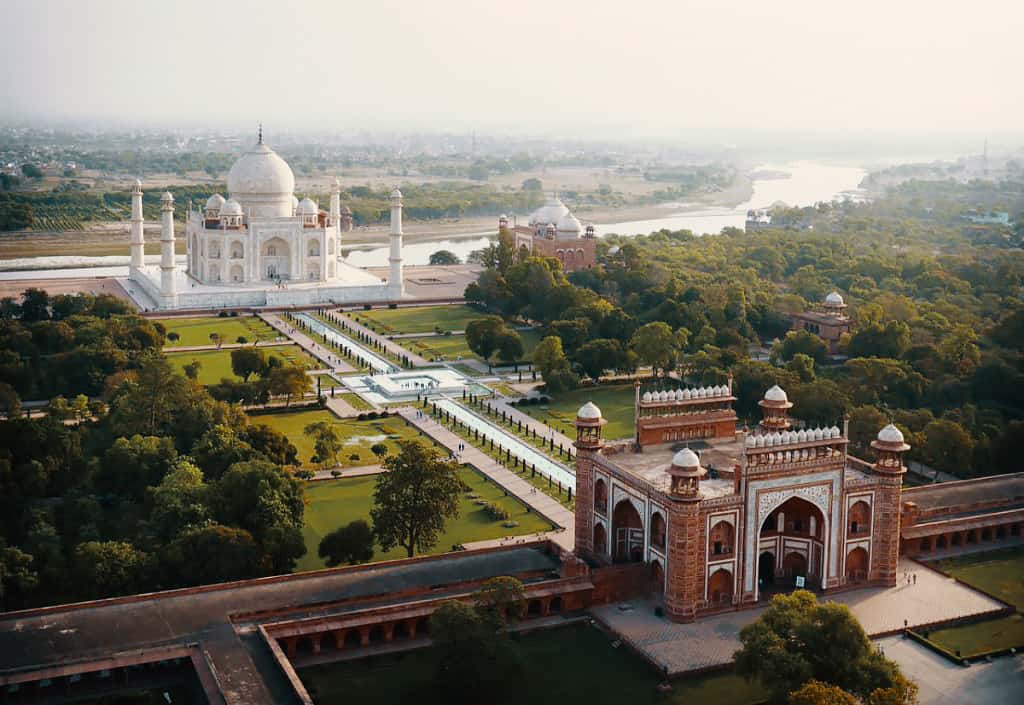 India is a country where cultures collide. You can’t describe the sensations such a mixture gives, but you can definitely get them across using aerial pictures and videos of the iconic structures of the country, namely Taj Mahal and the River Yamuna that flows behind it. The vibrant colors and the cultural aspect of the world-famous monument make it impossible to take a bad photo there, and there’s no better way to really appreciate Taj Mahal than from above. 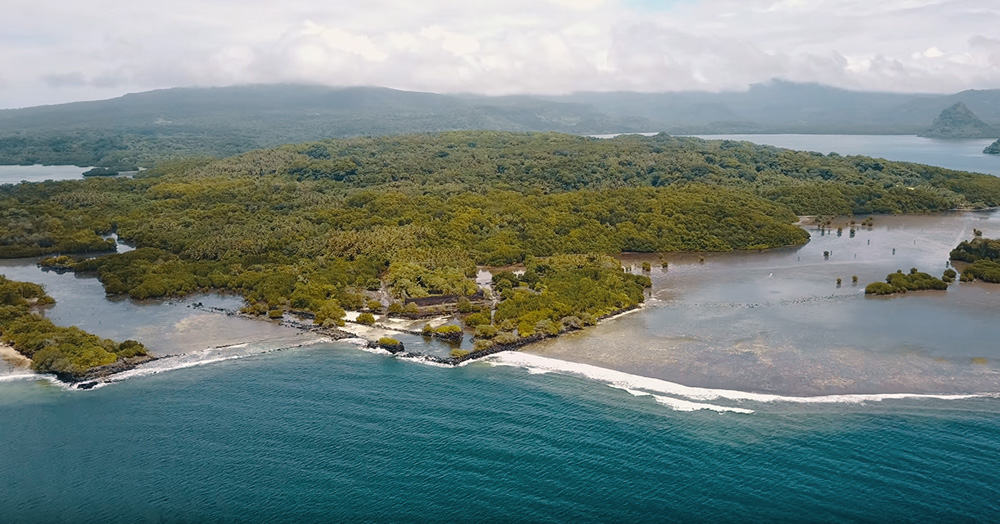 Micronesia is known for its magnificent islands that have been a major touristic destination for years. Out of the many spots that you can check there, the Pohnpei island holds a special place in any drone photographer’s heart thanks to its amazing landscapes and clear skies that allow for perfect shots from above. The setting is simply picturesque and usually visible in Micronesia’s (and the world’s) aerial photography competitions. 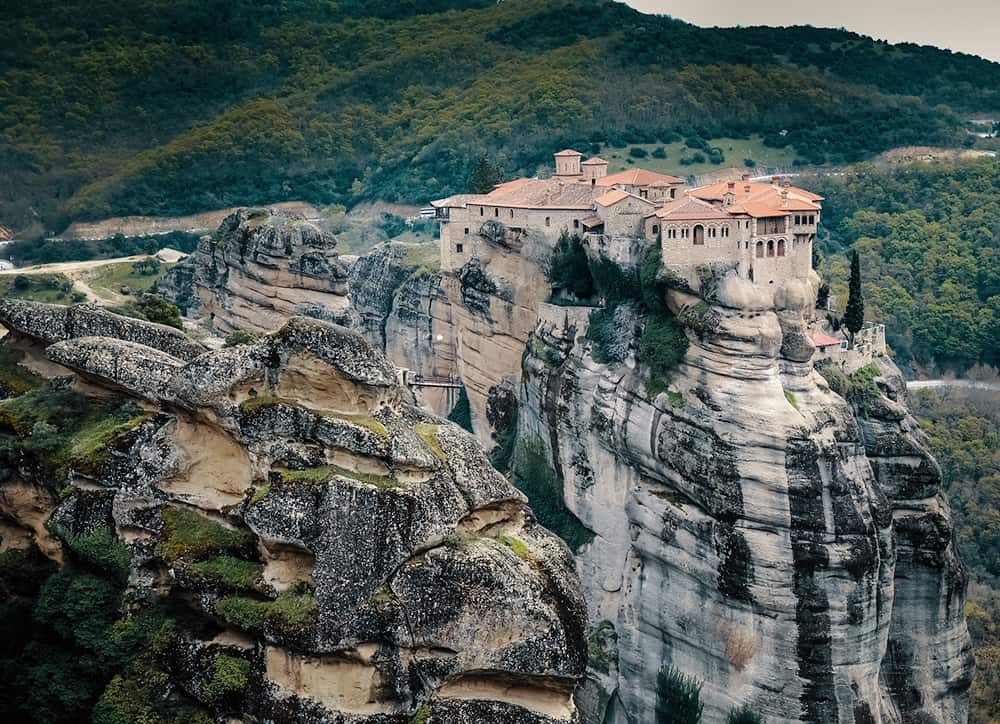 Metéora is a majestic region in Greece, the land of the gods. The city is mostly known for its floating temples, which form a network of complexes of Eastern Orthodox Monasteries. Due to the natural landscape, a lot of the spires of these mountains cannot be accessible on foot or by a vehicle, making drones the perfect medium to capture the wonders of Metéora in a safe manner. 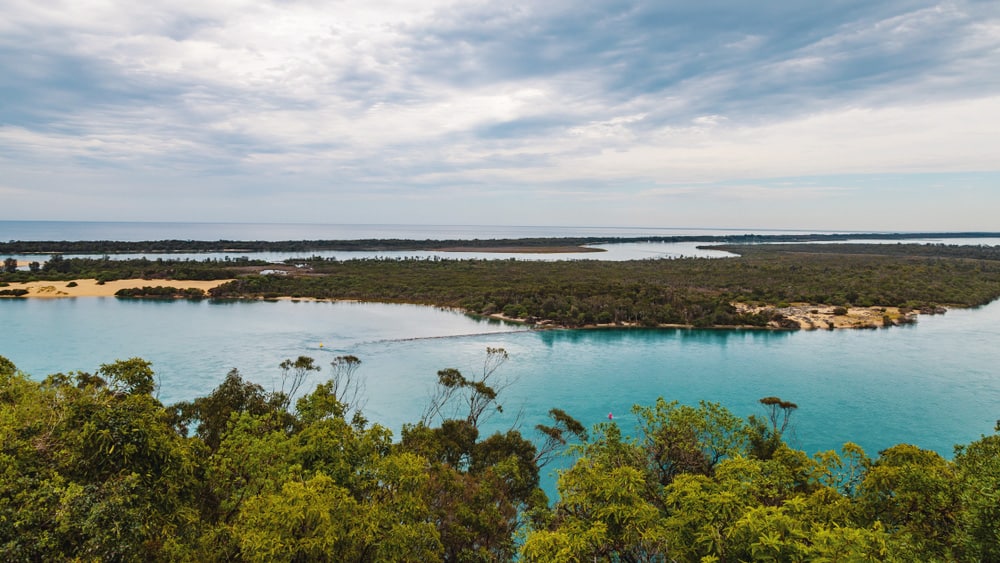 Anyone who has ever held a camera in their life dreams about going to Australia, where the modern civilization and nature live hand in hand in peace. Rigby Island, despite its small size, is one of Australia’s biggest attractions. From lakes to cottages and touristic villages, the island won’t cease to impress you, and your drone won’t touch the ground once it’s up. 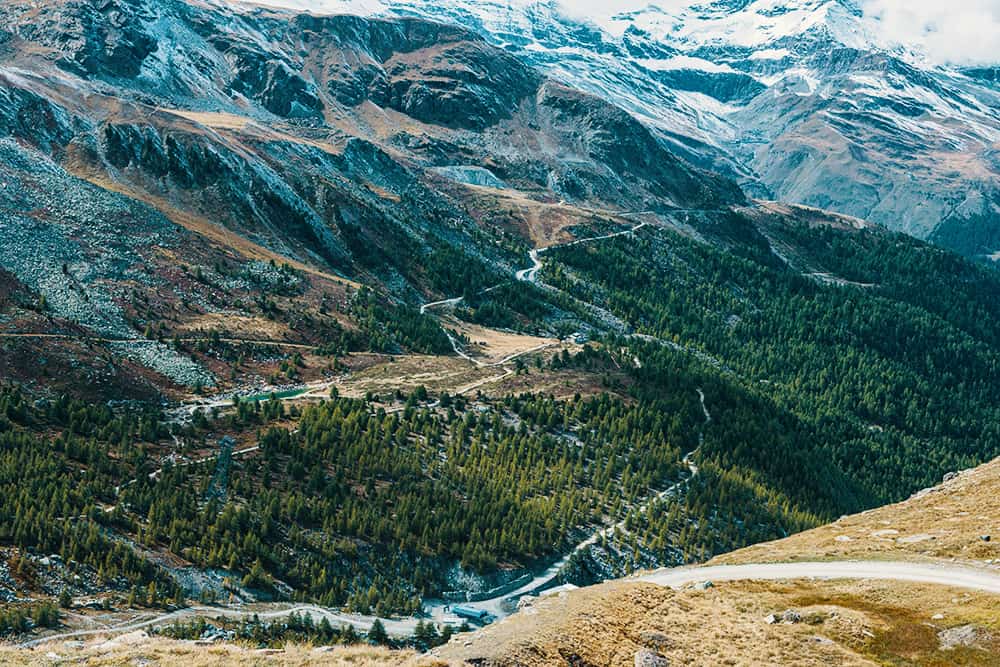 Although most drone shots available today are set in tropical areas, there are actually quite the handful of cold locations with amazing aerial views. Switzerland is a country of wonders, especially the village of Zermatt and its surrounding. The world-famous Matterhorn mountain will simply mesmerize you, as you’ll find drone-worthy shots wherever you turn, especially if you visit it during the autumn. 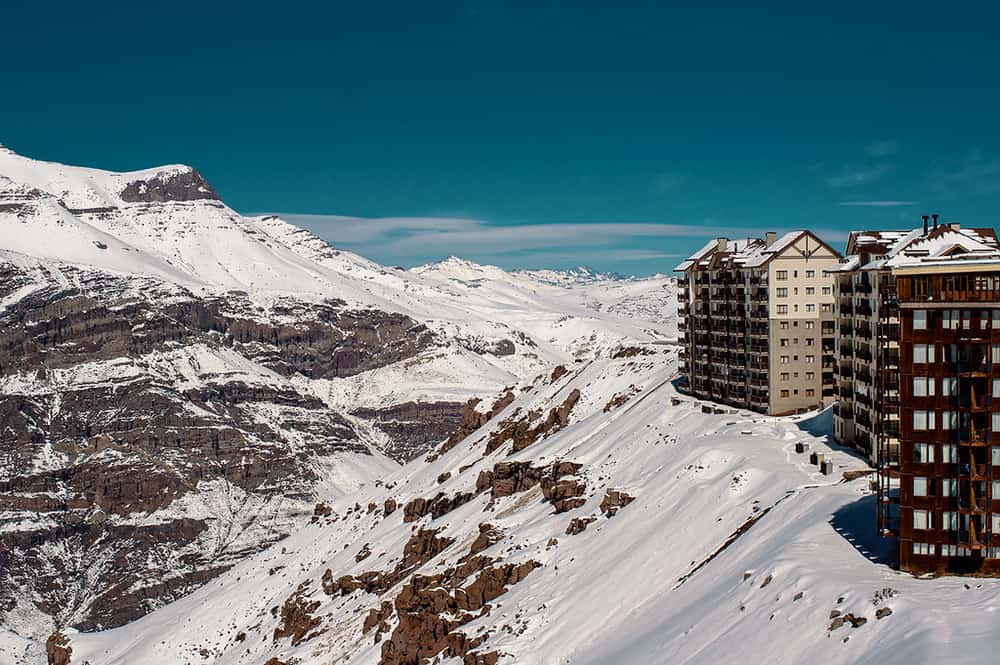 Have you ever checked some pictures of the Andes mountains and started imagining how many shots you can take from above? Well, turn your dream into reality by packing your bags and heading to Valle Nevado in Chile, where the ski resort is high-elevated in a way that will make the number of angles you can use to take pictures with your drone seem infinite! 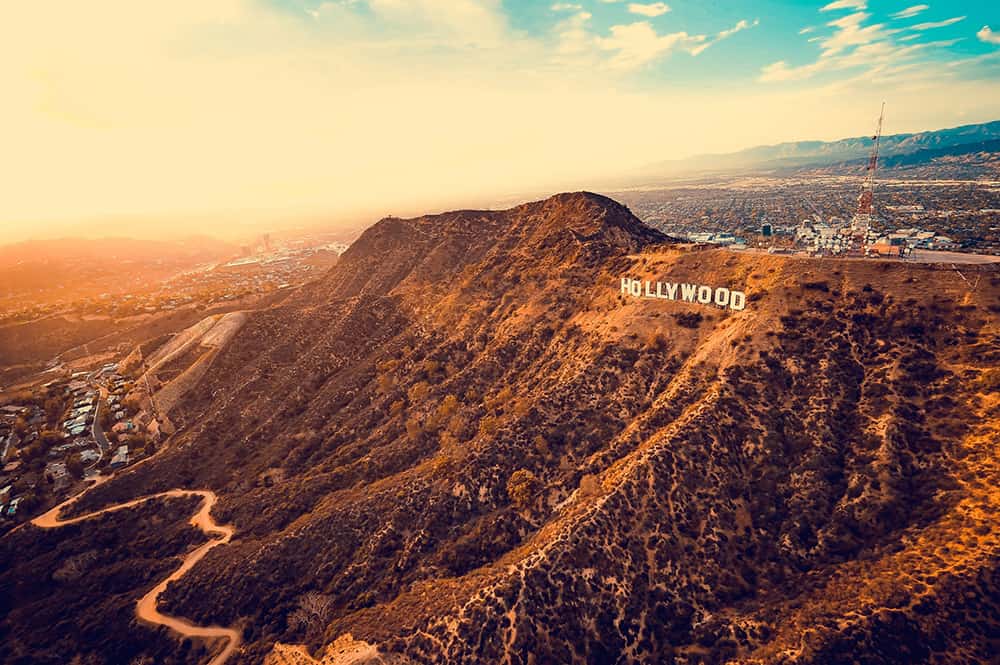 Los Angeles is called The Entertainment Capital of the World for good reason, but it’s not only good for having fun, but also for jaw-dropping aerial shots. From natural landscapes and the iconic Hollywood sign to the Griffith Observatory and expensive homes in the Hollywood hills, the photography possibilities are endless, and your drone will definitely be put to good use. 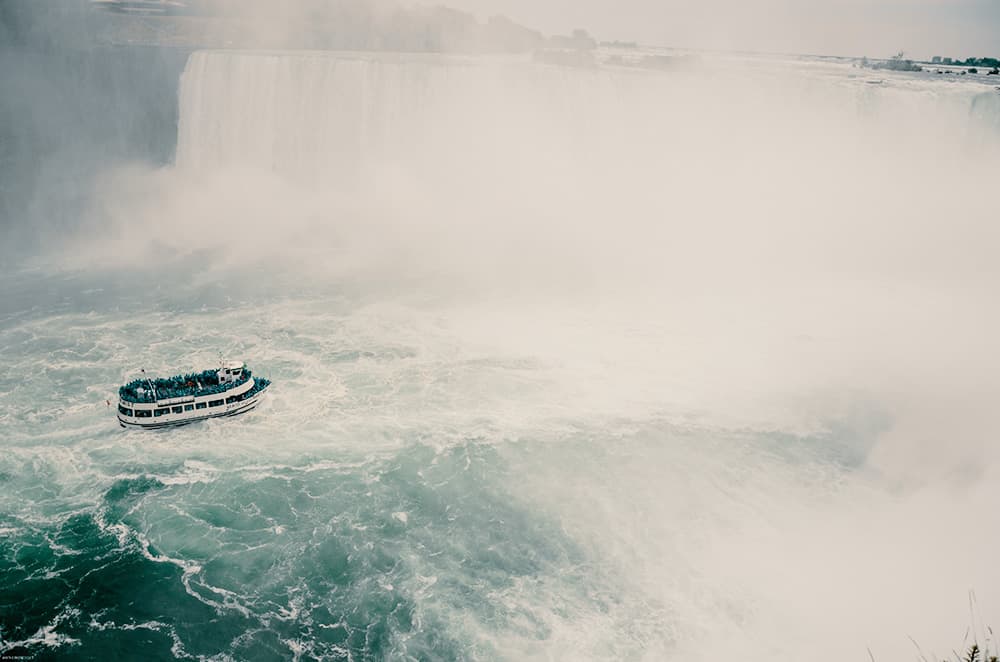 Thousands of people from all across the globe take their families to the United States – California border every year to see the Niagara Falls, one of the states’ most known natural wonders. Just imagine how your drone will follow the Niagara River as it rumbles toward the 188-foot high waterfall which falls at around 30 MPH to create a mixture of eye-catchy fog, godly roars, and fascinating rainbows. 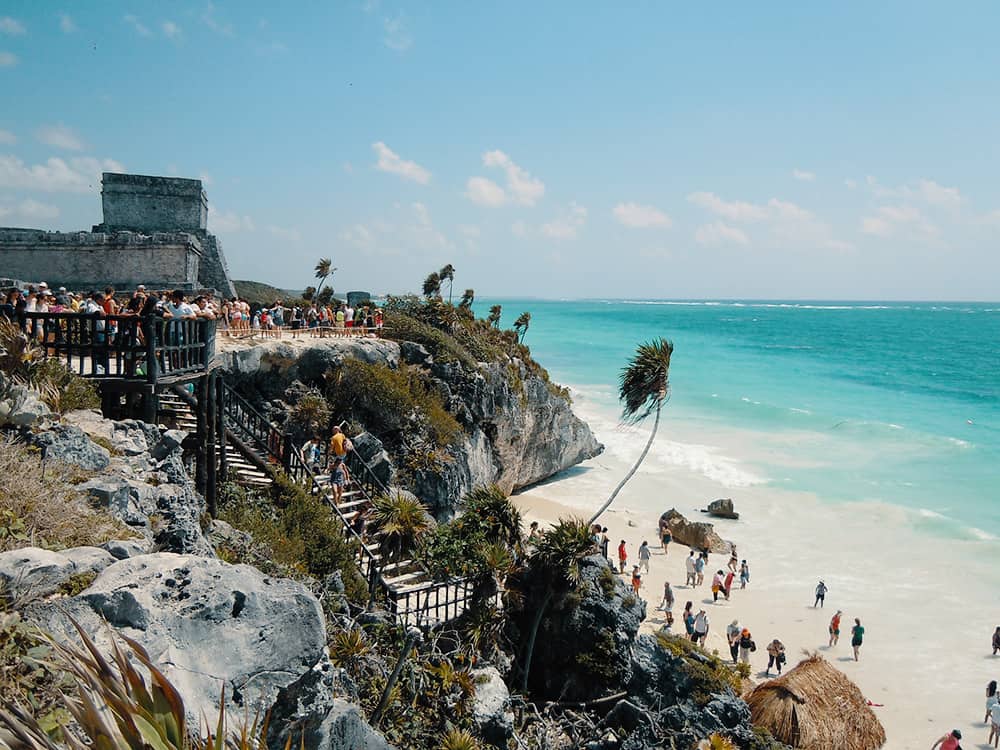 Mexico is known as the exotic destination for photographers, so expect nothing but excellent drone photography opportunities when heading to Riviera Maya. Riviera Maya stretches from Tulum to Cancun in the Yucatan Peninsula in Mexico, and it presents a seamless blend of nature reserves, white sand beaches, tropical jungles, and turquoise waters, over which your drone will run freely and capture some of the greatest once-in-a-lifetime shots.

Cruise 101: Things You Should NEVER Do on a Cruise 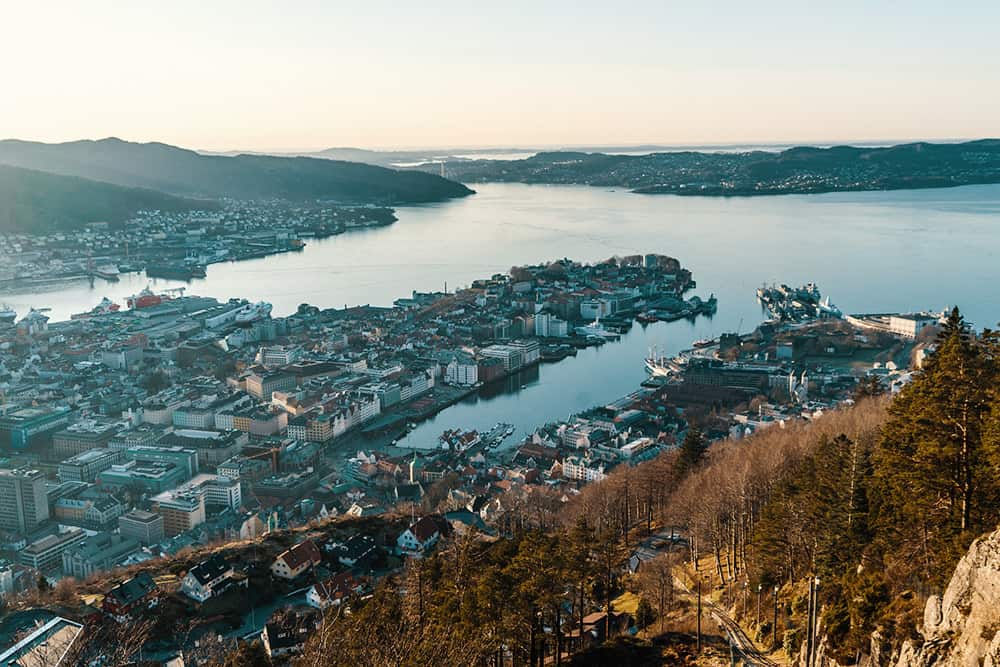 Have you ever wanted to capture some stunning images from above in a place where nature is still pure and unspoiled, and where crystalline water lives with grassy, dense land in harmony? If so, there’s only one location you can visit; the city of Bergen in Norway. There, not only can you enjoy capturing historical sites and amazing landscapes from above, but you can also have a chance to get footage of the Northern lights at night. Isn’t that a dream come true? 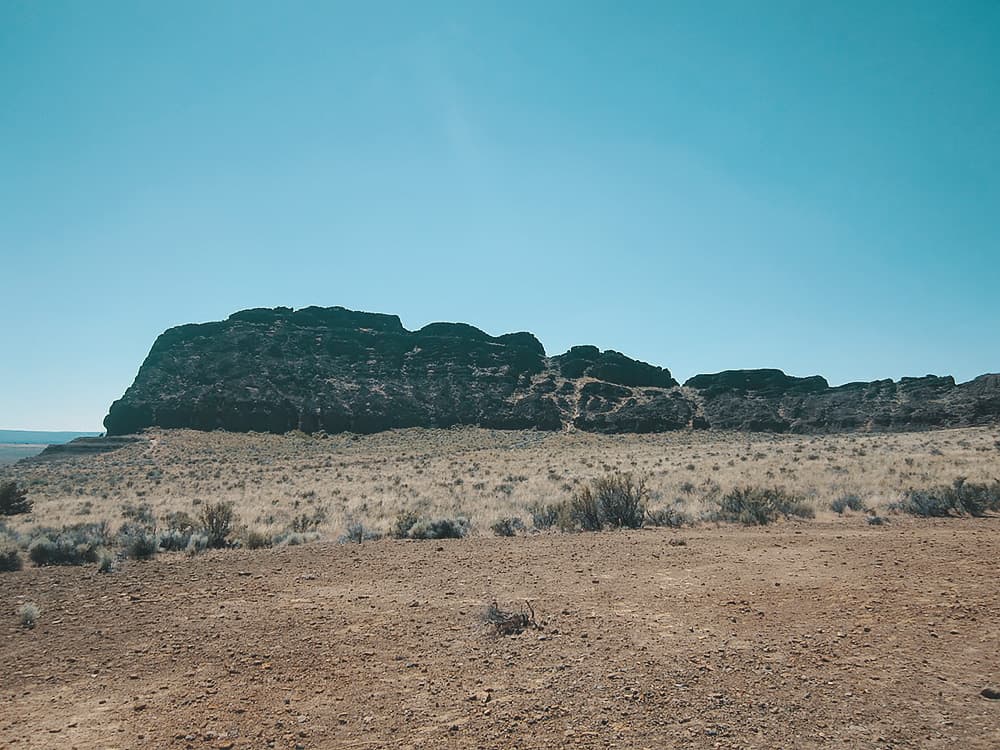 Some natural landscapes can only be captured with a drone to reflect their majesty and grandeur, which is the case for Fort Rock in Oregon, United States. Fort Rock, as the name indicates, is a natural fort that’s made of rocks. It was crafted by nature a long time ago, and it’s still standing in the desert of Oregon with roughly 200 feet in height and more than 4000 feet in diameter. Thanks to its desertic location, Fort Rock presents a perfect opportunity to take your drone on a spin, as the angles are literally endless.

Summer is right around the corner, and the Peak District National Park in the UK is preparing for the thousands of visitors and hikers it’s going to get, just like every year. Although the park is a real eye- (or rather drone-) candy all year round, it’s especially amazing during summer, as that’s the best season to explore the wide-open spaces and green pastures of the region without worrying about crushing into tall buildings or people. 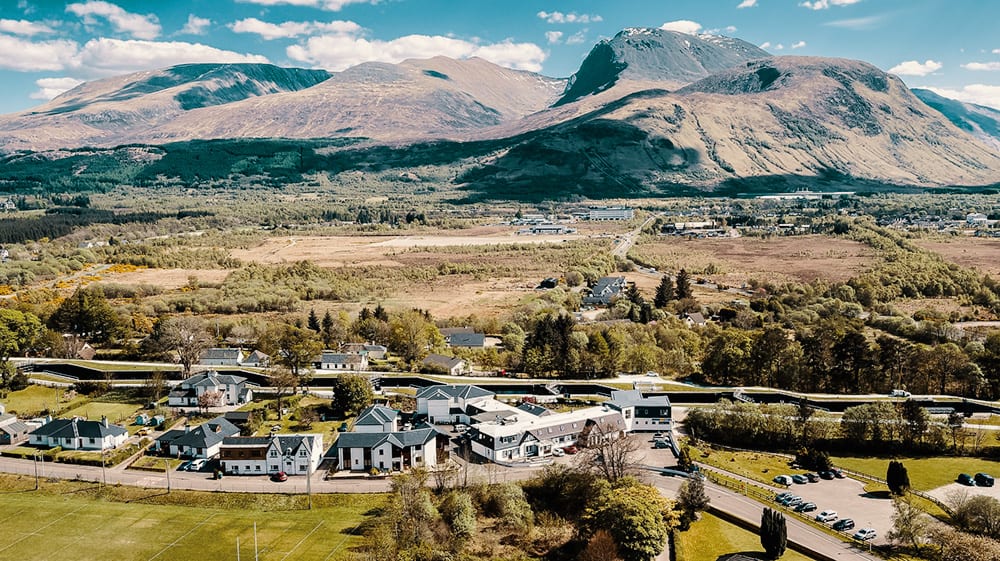 If Dubrovnik is the photographer’s dream, Ben Nevis is the daredevil’s heaven. Ben Nevis is Scotland’s biggest peak, and it’s an enticing challenge that you can take on with your drone this summer. Considering how fickle the weather is there, don’t forget to take your drone’s waterproof bag with you when you’re exploring the peaky rocks and the breath-taking area, even during hot days. Better worry than sorry! 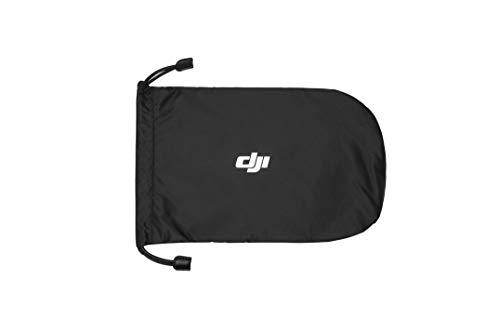 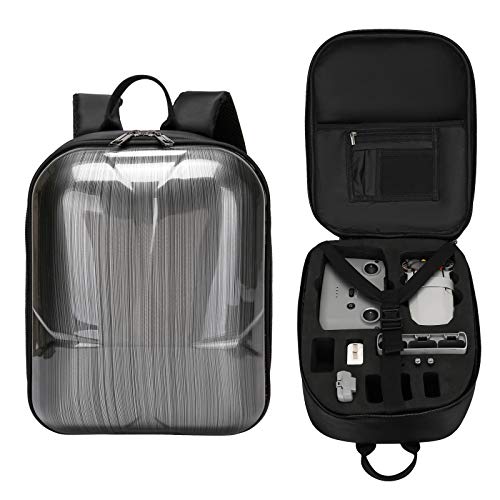 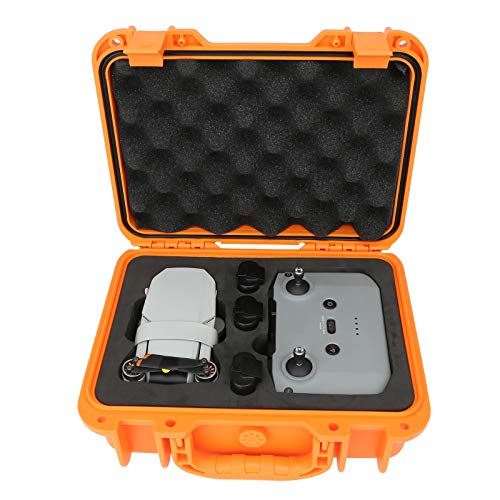 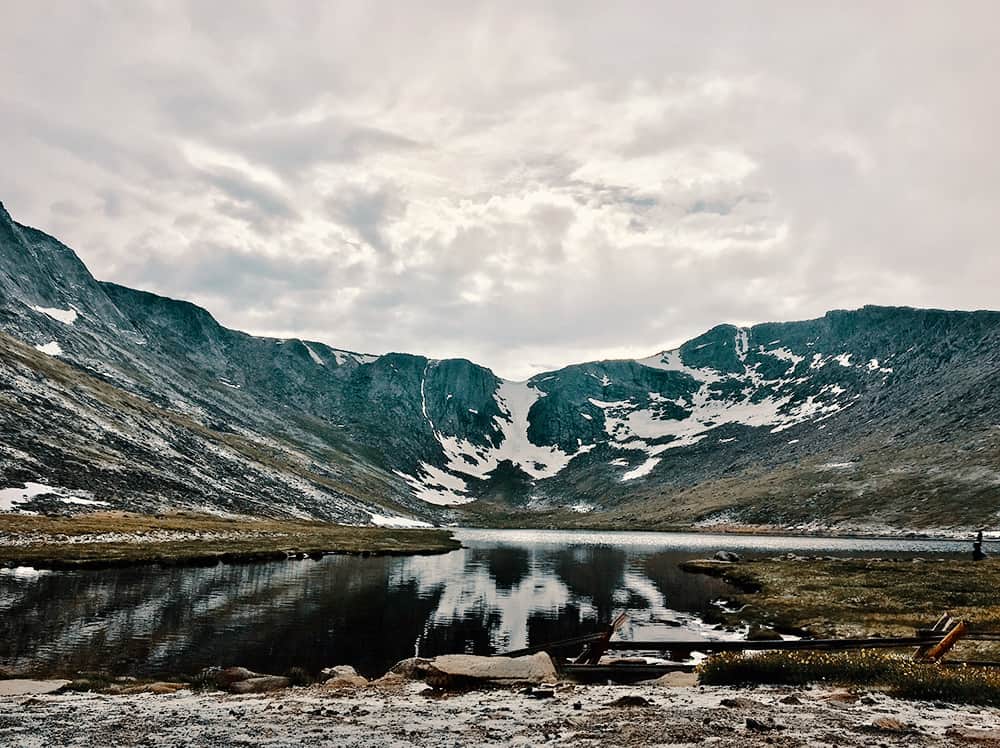 If you’re ever in Colorado, fill your gas tank and take a trip across the Mount Evans Scenic Byway, the highest paved road in North America, which will take you to Mount Evans, one of the most prominent peaks in the Rocky Mountains. The trip will be long, but the end result will be worth it, as you’ll find yourself before one of the most magnificent landscapes you can lay your eyes on. The journey to the mountain is equally amusing, as you’ll pass by some extraordinary scenes that you can capture with your drone, such as the Echo Lake and Denver Botanic Gardens.

Drones and the Future of Photography

Photography is an ever-evolving art, and drones are probably the next big thing. If you want to climb on the bandwagon the right way, charge your drone, pack your bag, and head to the nearest of the aforementioned locations and landmarks where you can run freely and take some incredible shots from above.

This checklist saves you valuable time by preparing for any vacation, taking care of vacation finances, securing your home while traveling, dealing with work and family matters, and getting ready to embrace your trip. Subscribe and get instant access now!

Price last updated on 2023-02-04. Links & images are from Amazon Product Advertising API. Our editors independently research, test and recommend the best products and services. We may receive a portion of sales from products purchased from this article at no additional cost to you.