The 10 Best Skateparks in Los Angeles 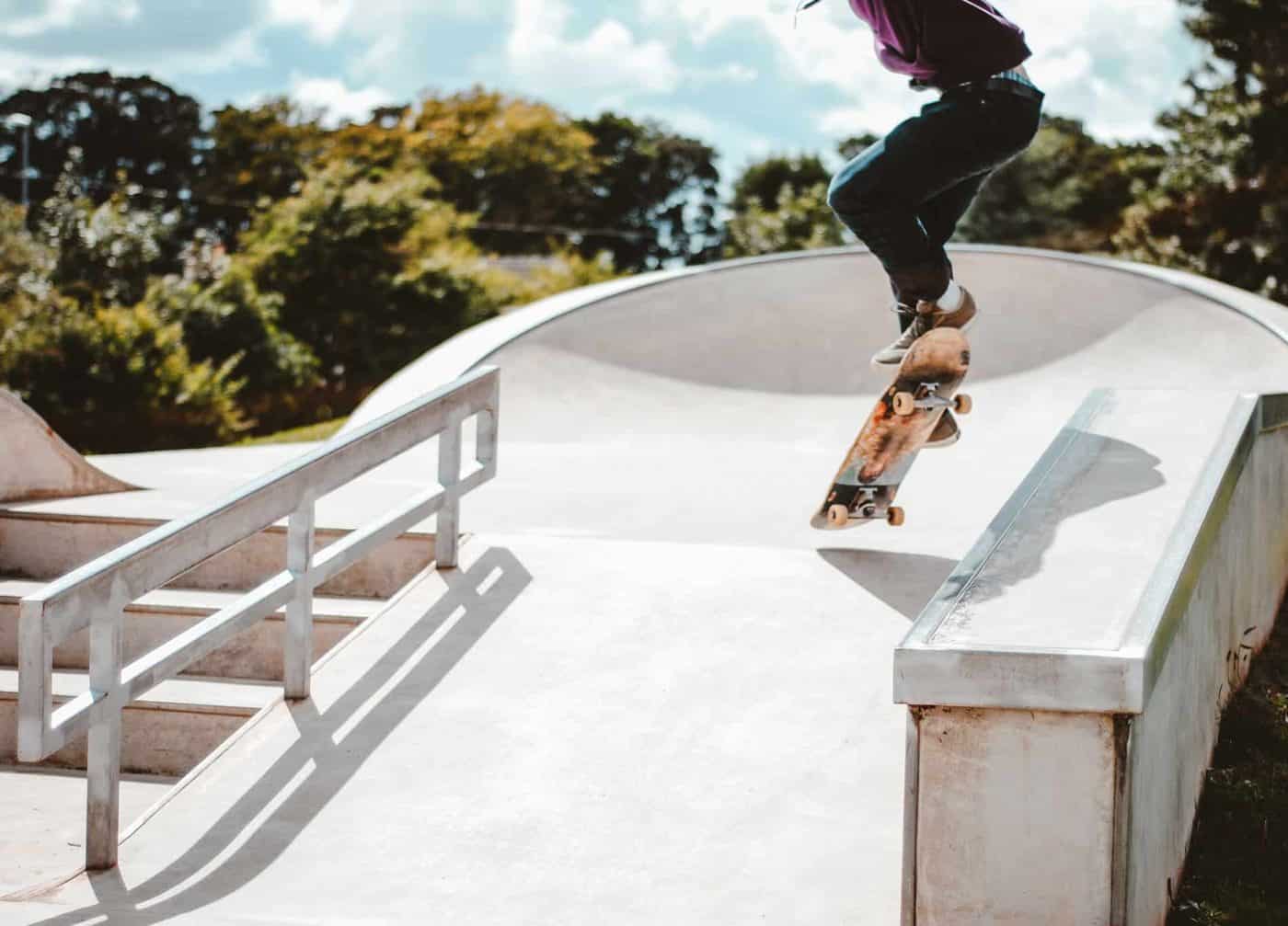 Los Angeles, a place best known for its diversity, the entertainment industry and the population, has some of the best skateparks in the world. There is nothing better than skateboarding in Southern California. Skateboarding dates back to the 1950s when the surfers wanted a way to surf on the land. At this time, it wasn’t possible to surf the waves as they were flat. This was when skateboarding was born.

To top it all, in 1963, the first Skateboarding Championships were held in L.A. The amusing part is that these championships took place between two parties: Hotdoggers and Hill Riders. Hotdoggers were skateboarders who loved to perform tricks and stunts while Hill Riders did plain skateboarding downhill at a very high speed. By the 1990s, the popularity of skateboarding had started to diminish. It only picked up again in 1995 when extreme sports were introduced and skateboarding took on a new life.

If you want to do regular skateboarding in a sunny area, think no more. Los Angeles has 284 days of sunshine so you can easily go around skating the streets any day for most of the year. Not to mention, L.A. has 21 city skate parks. This gives you the freedom to choose your favorite park. It is not unusual to see skaters making the most out of their skateboards around the busy pedestrians on the streets of Los Angeles.

To help you explore these skate parks, here is a list of 10 undoubtedly best skate parks in L.A.: 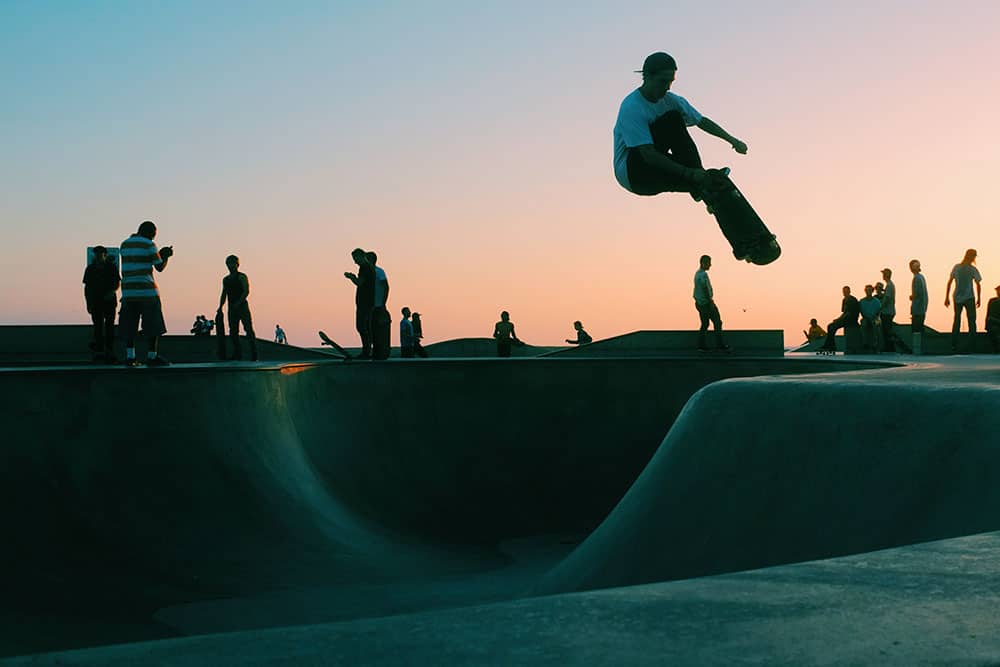 Venice Beach Park, as you would imagine, is next to an amazing ocean. Moreover, it is only a short distance away from the Venice boardwalk. This skatepark is designed like a street and has many obstacles similar to those found in a street such as rails and bowls, because what is skateboarding without any hindrances? These rails and bowls only make you better at skateboarding. With every loop and run, you learn a new skateboarding technique and master the art of skateboarding.

This park is always filled with both young and old skateboarders hence providing everyone an equal and open platform to skateboard. And not to forget the views inside the park! They are to die for! This huge (precisely 20,000 sq. foot park) has enabled every skateboarder to perform all types of tricks with its deep pools and solid stairs. To add to your excitement, some famous skateboarders such as Blake Johnson and Matt LeMond are seen practicing here. What more reasons do you need to visit this skate park and enjoy your time here with your skateboard?

The famous documentary by Stacey Peralta (2001) titled “Dogtown and Z Boys” was also shot here, making it a nostalgic visit for the locales here. 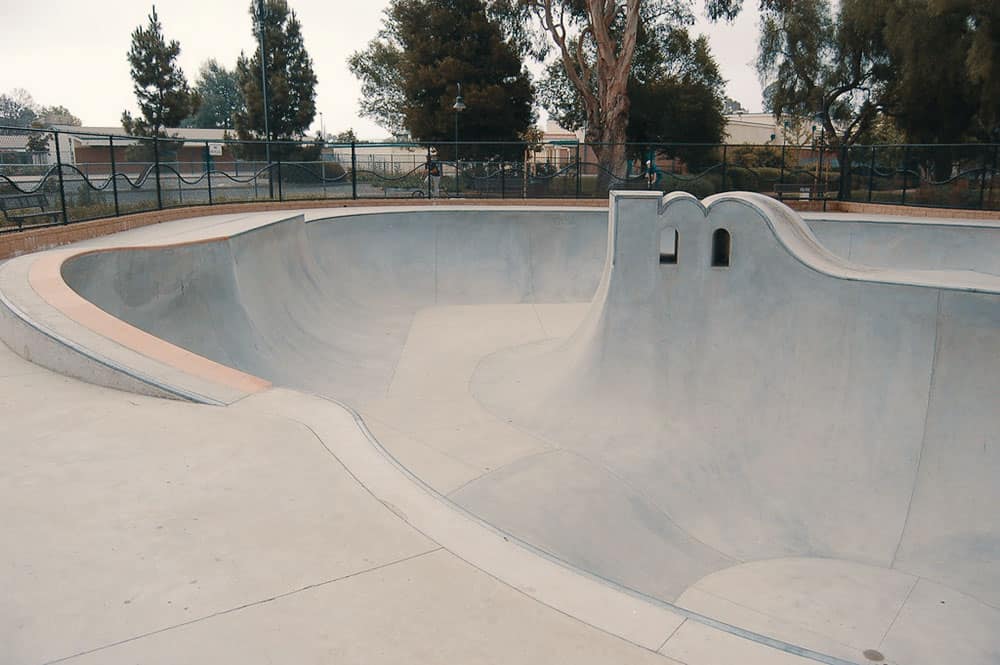 Moorpark, popularly known as “M.P.” amongst the local community, is a part of Poindexter Park. To say that this park is liked by many regular skateboarders here would be an understatement. It has many pillars within its domain, including an “M” (an abbreviation for Moorpark). This ‘M’ is located on the park’s highest pillar, a pillar attracting some of the park’s most breathtaking tricks.

To help you improve your skillset, there are different areas targeting different skill levels so you can practice according to your level. These areas cater to the beginner and advanced levels. The beginner level is for the freshers who are just there to learn the basics of skating before they move on to higher levels to practice on uneven terrains.

The second level, also known as the advanced level, has a duplicate backyard pool which is designed by Lance Mountain. To add to its name, Moorpark Skate Park also has a canyon-based course. This course has a gentle beginning but drops quickly and has a lot of twists and turns before finally ending in a very deep bowl. 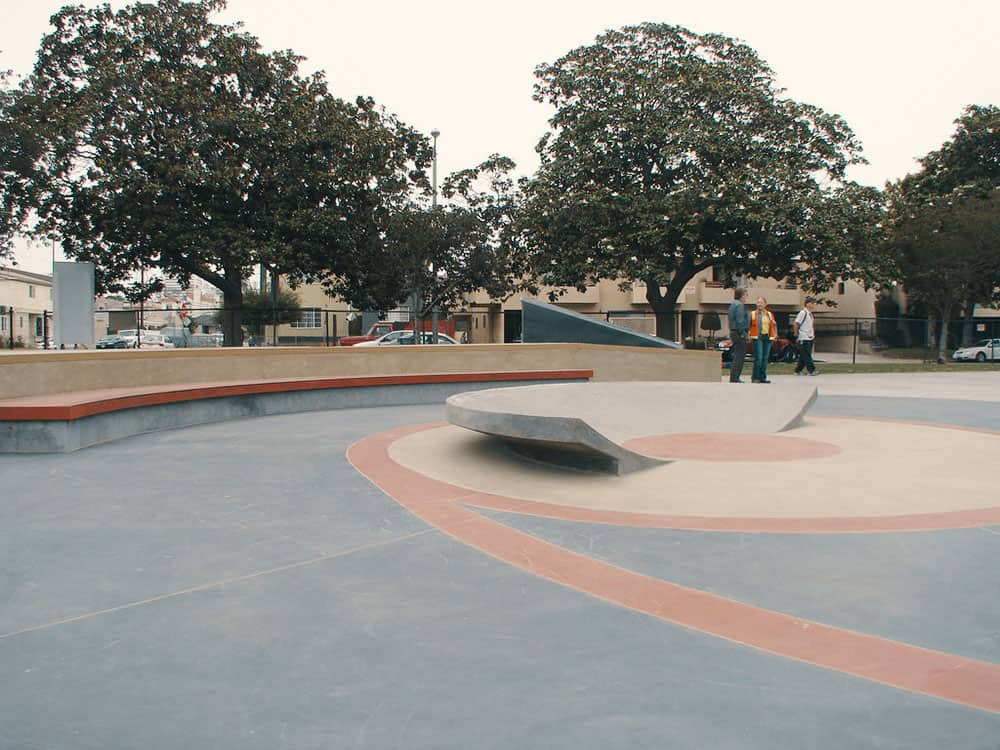 Have you ever heard of an entire town being a skate park? Well, now you have! Stoner Skate Plaza is one of those rare towns which is entirely a skate park. There are still locations where skaters are yearning to have a skate park built and Stoner Skate Park serves as a model for those. This dynamic park was influenced by the West L.A. Courthouse’s skate scene which is also one of the famous visiting places for street skaters. It consists of a beautiful plantation, a small flight of stairs and an ideal ground for practicing. 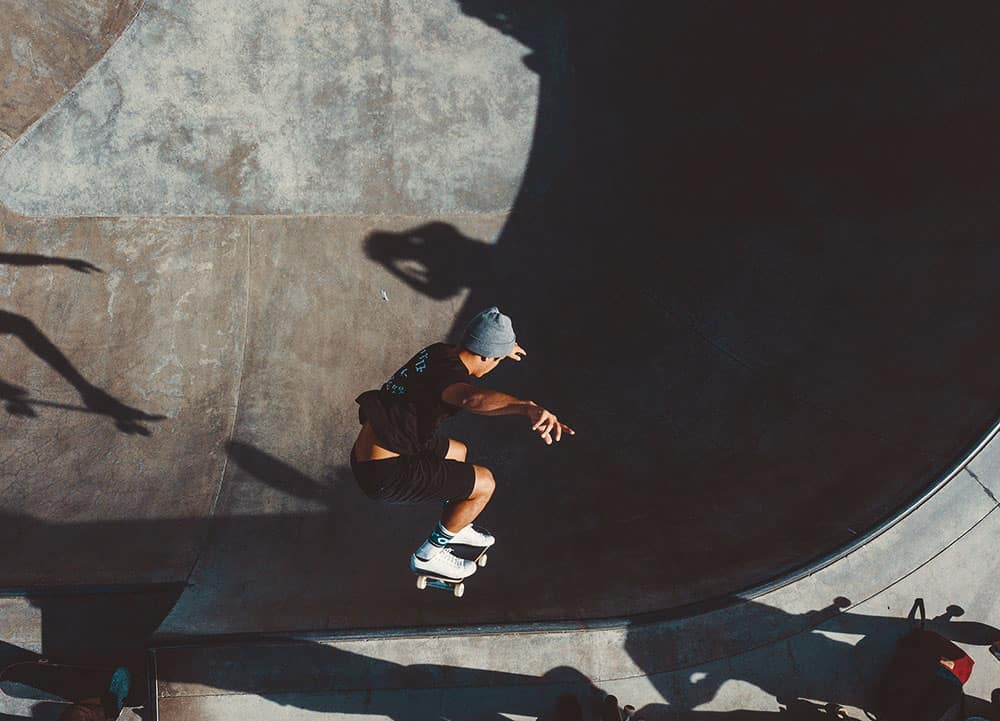 The Cove Skate Park is situated inside Santa Monica’s Memorial Park. The Cove is home to skaters belonging to all age groups and levels. Spanning over 20,000 square feet, the Cove Skate Park has all the obstacles such as bowls, ramps and stairs. Despite these being present, the Cove is a beautiful, must-visit skateboarding destination for anyone residing in L.A. The site of the Cove is so breathtakingly beautiful that even if a person does not skate, it is always a good idea to visit and look around the park.

Everyone, skater or non-skater, who enters the Cove is required to wear protective gear. The park is not only restricted to skateboarding but also offers other activities such as bicycle-riding and in-line skating on designated days and hours. 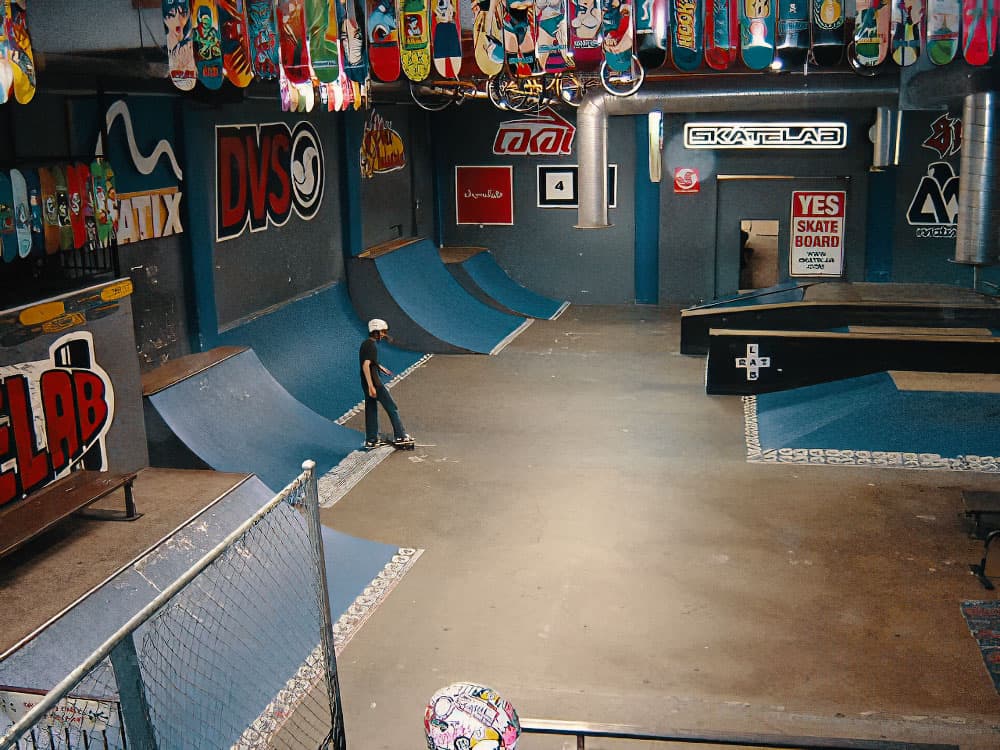 The day pass may cost you between $10-17 while the annual pass is $49. While you’re at it, don’t forget to visit the museum as well. Skatelab also serves as a learning platform for the beginners as they can take introductory classes for skateboarding.

Skatelab is an amusing park that you do not want to miss out on. With skaters practicing the tricks usually found in video games or during the X-Games, Skatelab is definitely worth the visit. It has many obstacles namely rails, boxes and stairs. Originally built in 1997, Skatelab was designed by Team Pain. However, local volunteer skaters also assisted in building and designing the park. Skatelab is one of the oldest parks in this region.

It also consists of the Skateboard Hall of Fame, Skateboard Museum and an interior skatepark with four different sections for skateboarders to explore and enjoy.

*Update* Skatelab is currently closed permanently, but Steve Badillo who is the new owner has plan to reopen Skatelab in Simi Valley. 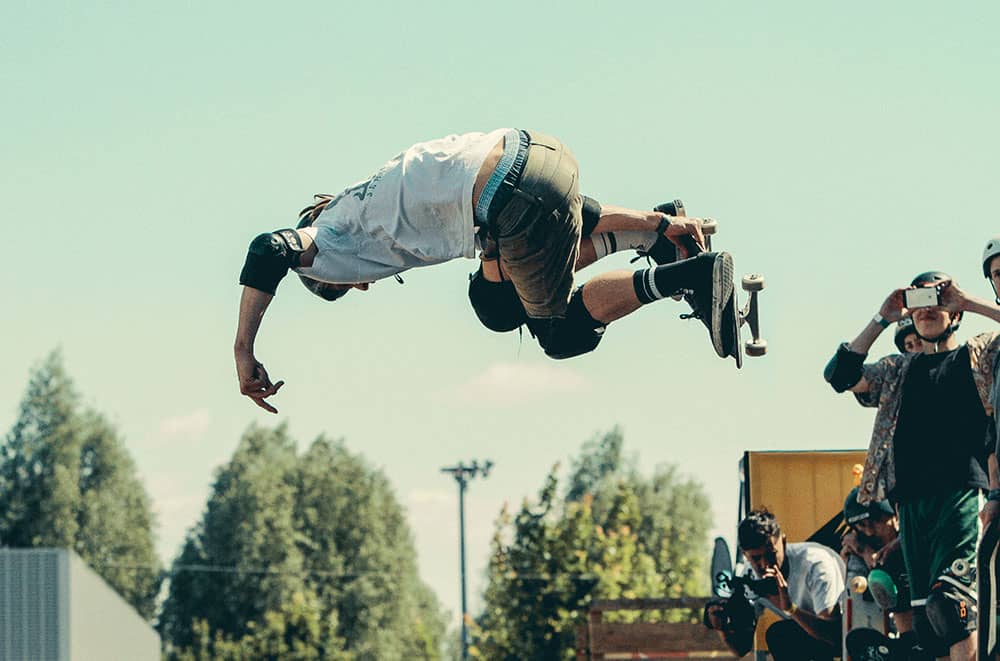 Culver City Skate Park came into existence with the collective effort of the local skaters and the city of Los Angeles. This skate park has many types of obstacles including stairs, rails and ledges. It should be noted that Culver City Skate Park is smaller than other skate parks, measuring around 10-15000 sq. feet. It is important to mention two of the best features of Culver: free entry to the park and a boasting pool. The pool comprises of 2 six-foot pockets which allow for challenging tricks.

The park also has a pipe of quarter length, and it is open till sunset. Meanwhile, the staff is on duty. Don’t forget to wear your helmets and skating pads within the premises of the park as without that there is no entry. 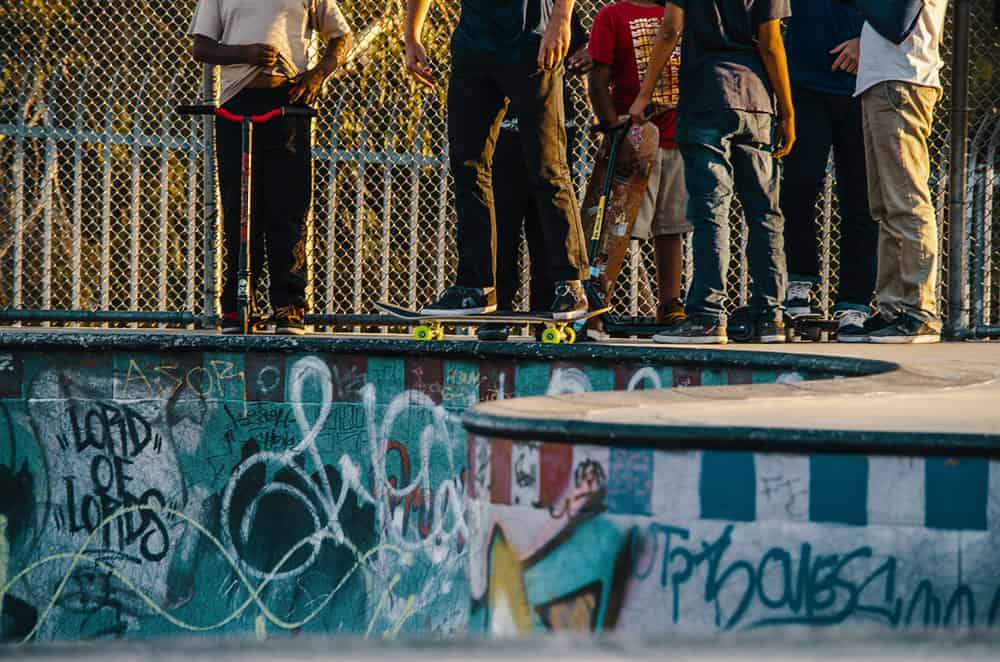 Garvanza Park is one of the largest and most renowned public state parks located in North East L.A. This small park has something very unique to offer. It has a deep bowl inside for top skaters and Olympic aspirants such as Tristan Rennie (20) and Nicole Hause (21) have had the privilege of practicing here. Both aspirants prefer twists and turns to perfect their skills. This suggests that Garvanza is a great place for those with advanced skateboarding skills.

If you are practicing at an advanced level, then Garvanza is your go-to place. Make sure you come out as a “Skating Master” once you leave after practice.

Riders pour in from all over the world to experience the beauty of this skate park. As mentioned, some key industry names have also stopped here from time to time. However, Garvanza does not attract a lot of tourists like Venice State Park does. Normal people would be seen strolling the park including those who want to take a break and unwind from their busy schedules or skaters who wish to perfect their skills. You might also witness middle-school kids here who stop on their way from school to home.

Garvanza is more like an isolated place where people wish to practice their skills in silence and solitude. It is a place for people who like to relax, stay focused and then continue with their practice. Garvanza has enough space for every introverted person to enjoy his/her “me-time”.

One of the distinguishing features of Garvanza which is not present in any of the other skate parks is that Garvanza (as shown in the picture) has a very colorful street art design. Who doesn’t like street art? No one! And that’s not all – this street art is subject to constant change, so you might find something new every time you visit! 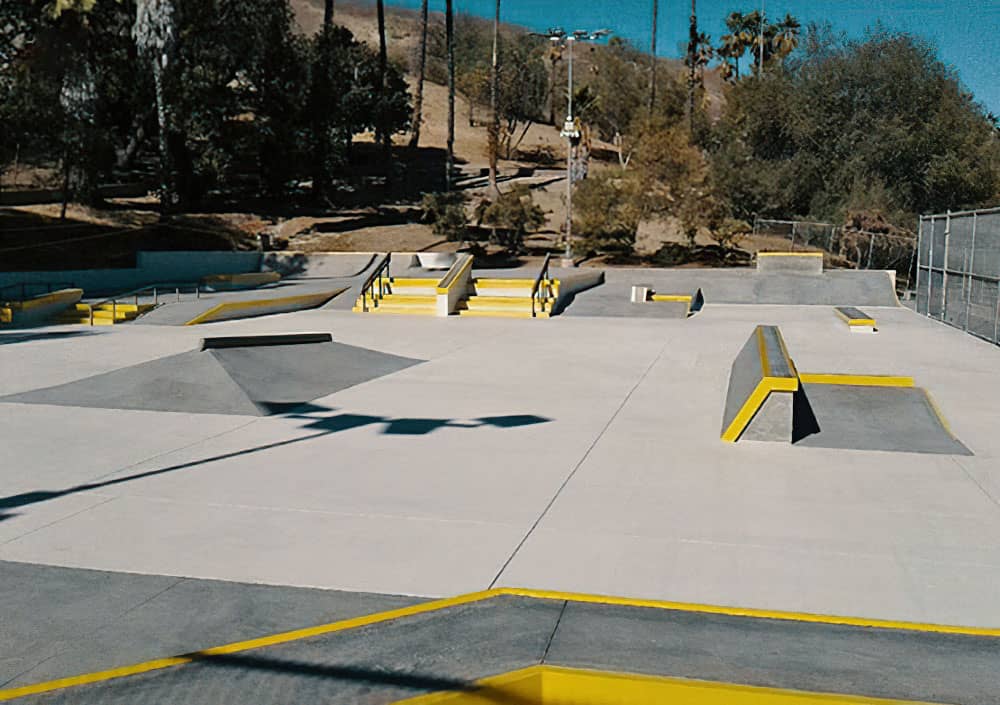 What a unique and interesting name for a park! You probably would have already imagined what the park looks like. From the word ‘sereno’, it is obvious that the park would be ‘serene’ and ‘peaceful’. However, there is just more to this. El Sereno Skatepark might be smaller than other neighborhood parks, measuring around 12,000 square feet and comprising of many obstacles and blocks within it. These obstacles include manual pads, blocks, stair sets, euro gap, hubbas, flat banks and a frame.

Designed by California Skate Parks in 2019, El Sereno is a modern skate park which is every skater’s dream. Might we also add that some famous skaters would be seen skating around this area. Oh, what a sight!

El Sereno offers a multitude of facilities to both visitors and skateboarders alike. These include tennis courts, baseball fields, basketball courts, children’s play areas, community centers, fitness zones, picnic tables, swimming pools and restrooms. What more can you ask for in a skate park?

Santa Clarita is one of the very huge and amazing parks to exist in Los Angeles. It also has the honor of being one of the oldest parks in the vicinity, having been constructed in 1998.

This magnificent 40,000 square foot park brings joy to all kinds of skateboarders, beginner or advanced level. After all, it has a vast ground for the newbies to practice without any hindrances.

Simultaneously, it has obstacles (shown in the picture) such as rails, stair sets, snake runs, planters, a tunnel, large bowls, and a street plaza. These obstacles cater to the advanced level skateboarders. 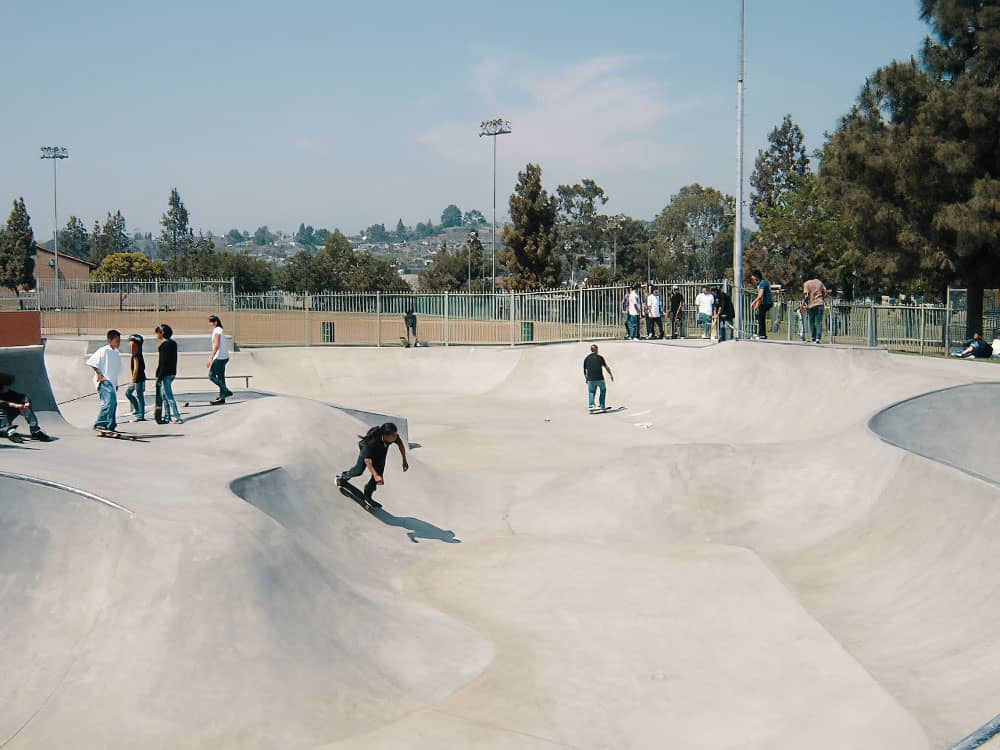 Finally! We come to the biggest park in Los Angeles! Occupying 30-acres of Belvedere Community Regional Park, Belvedere Skate Park has an astounding worth of $1.1 million.

It encompasses many obstacles within it such as stairs, railings, snake-runs and bowls. The gates located near the baseball field and tennis courts have a very warm and welcoming aura to them, thereby attracting the local community. The vast ground with all its obstacles provides excellent opportunities for the skateboarders to learn and practice new tricks.

This concrete park, representing the California skateboarding culture, was constructed on May 19, 2007. Belvedere is situated in East Los Angeles, close to the popular “Love Bridge”. On the first look, it may not seem as iconic or appealing as many other parks, such as Santa Monica or Skatelab, may appear. However, everything is not as it seems.

While it may not appear too attractive to the visitors or skateboarders, Belvedere gives a different kind of pleasure to the skaters. Skating here gives skateboarders the freedom to enjoy the wall rides.

Last but not the least, one of the perks enjoyed at Belvedere Park is that it does not have any tickets and the admission to the park is absolutely free! Enjoy!

How to Prepare for a Long Distance Motorcycle Trip

10 Steps to Getting Over the Fear of Flying

One Week Spain Itinerary by Train